A week ago Monday morning, I was walking Wrigley past Harvey’s Island Grill when I noticed a sign posted near the door: “Closed due to a death in the family.”

I knew what that meant. My cousin Vertrum Lowe, father and grandfather to the Sawyer ladies who operate Harvey’s, had passed away.

He had been sick for a while. But knowing the end was coming didn’t make it any easier when it arrived.

Born during the aftermath of the worst hurricane ever to hit Green Turtle Cay, Vert was the oldest child of Albert and Annie (Curry) Lowe. Though they grew up in a time of poverty and need, Vert and his young friends made fun out of the little they had.

Sticks and seagrape leaves became tiny boats to sail on Settlement Creek. They shot marbles and tended pet rabbits, guinea pigs and even seagulls. In their fathers’ dinghies, they sculled up into Black and White Sounds to fish, later selling their catch for a few pennies of spending money.

As children often do, Vertrum and his friends they sometimes resorted to less productive pastimes. “We used to set one another to fight,” he told me. “I’ve been in more fights than you can think of. But Daddy didn’t say anything about it. Boys fight.”

Occasionally, Vert’s mischief got him into trouble. “There was a man called Mr. Jimmy,” he said. “He walked barefoot all the time. We used to blow these hogberry seeds through pawpaw (papaya) quills, so that he would walk on them. One day, he was coming up the road and stepped on one. He blamed Milton and me for it, but we didn’t do it. Still, he walked right down and told Daddy that I shot hogberry seeds and caused him to hurt his foot. Daddy called me. I told him I didn’t do it. He still took off his belt and I got a cut backside.”

From diving conchs to making rope from sisal fibres, from transporting dried shark hides and oil to working aboard the crawfish boat the Stamba, Vertrum was involved with – and could remember in remarkable detail – most of the industries that sustained Green Turtle Cay throughout the 20th century. And he generously shared these vivid memories with anyone who asked.

Vertrum was a captivating contradiction – entertaining, for sure, but in a quiet and dignified way. I don’t recall ever hearing him raise his voice or utter a critical word about anyone.

But that soft-spoken nature belied a stubborn streak. He (and others have) told me that as a child, if he didn’t like what his mother had cooked, he would throw the pot or pan out the window! Though it no doubt failed to amuse his parents and teachers, this stubbornness would later serve him well.

Vert’s father, Albert Lowe, had been a renowned model shipbuilder. When he died in 1985, he left a commissioned model ship incomplete. Someone suggested to Vertrum – who had carved smaller and simpler models for his son and others – that he complete the piece.

At first, he said he had neither the patience nor the time. But then, he told me, “I heard one of the other guys remark, ‘nor the ability’. I did it just to prove him wrong.”

Four or five weeks later, Vertrum called his brother Alton to see the finished model. “He didn’t believe I had done it,” says Vertrum.

“I was amazed at how good it was,” recalls Alton. “The man who commissioned the model was more than pleased.”

In time, Vertrum would carve more than 300 model dinghies, ships and mailboats.

His works are displayed in collections all over the world — Florida, Texas, Australia, China, even the United Nations. In 2004, his craftsmanship was recognized with a Bahamian Cacique award.

Visiting Vert in his workshop offered a glimpse into his personality.

The dozens of glass jars, hanging in tidy rows from shelves and the ceiling, spoke to the meticulous and organized nature that enabled him to accurately recreate traditional Bahamian vessels. The historic nautical memorabilia displayed in a glass case demonstrated the pride he took in his seafaring ancestors. And the shop sign, fashioned from marbles, revealed the sense of playfulness he never lost.

The first time I visited Vert in the workshop, he went into the house and brought out photos of his children, grandchildren and his late wife, Cynthia. He told me how they had met, and about their lives together and how much he had loved her.

He also told me about my own ancestors – my grandparents, Lionel and Lurey (Curry) Albury, and my great-grandparents, Herman and May (Gates) Curry. I never met Pa Herman, and by the time I came along, Ma May was in her sixties, so it was a treat to hear tales of them in their younger years.

Whenever I saw Vertrum and asked how he was doing, his blue eyes would sparkle and he’d say, “Much better for having seen you!”  He always had a hug and kiss for me. (I had to smile at his funeral, as every single woman who knew him related exactly the same story.)

No doubt Vertrum’s family – his siblings, Iva, Alton and Leonard, his children, Ray, Trina and Johnny, his grandchildren, Stacey, Lisa, Raenell, Heather and Johnny Jr. and their families – will miss him, and Tom and I send our love and deepest condolences to them all.

But really, Vertrum was “Pa Vert” or “Uncle Vert” to almost everyone on this island. We’ll all miss his hugs, his kisses and his stories. We’ll miss seeing him perched on his golf cart, feeding the seagulls and watching the sunset. Or sitting in the late-afternoon shade beside the former Holy Jumper church, overseeing the regular gathering of local fellows that I jokingly call the “four o’clock men’s meeting.”

Vert was a Green Turtle treasure, and like the ripples on Settlement Creek, his loss will touch the entire Green Turtle Cay family. 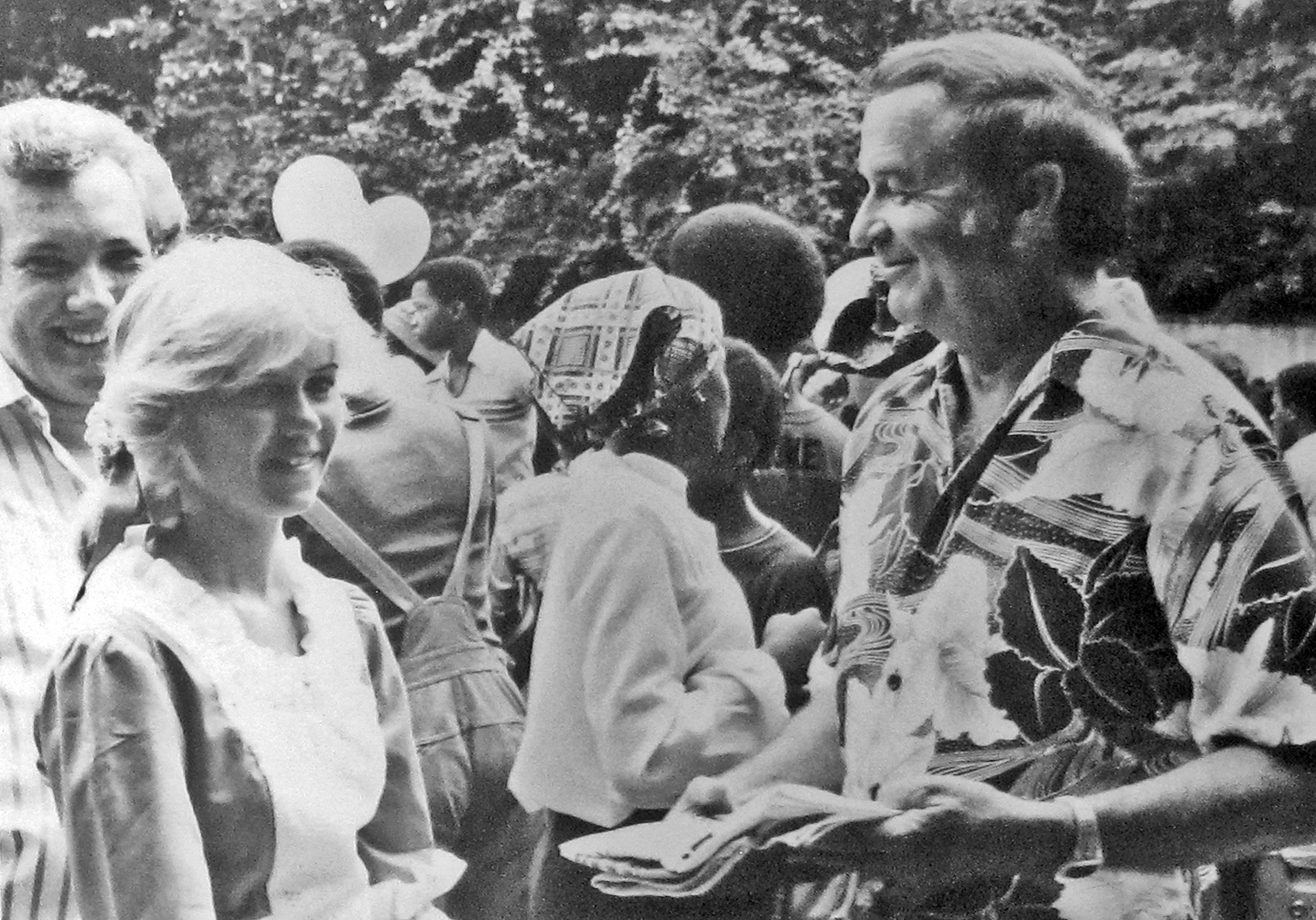 8 thoughts on “A Death in the Family”